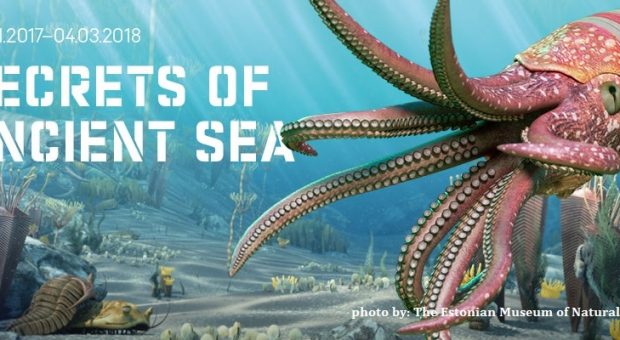 At the centre of the exhibition, there are the peculiar sea creatures, who have gone extinct, but whose life and looks are illustrated by the videos modelled on fossils. “We’re used to saying that Estonia is a maritime country and the sea has really influenced the area of Estonia a lot,” Sander Olo, the curator of the exhibition, says. “At the exhibition “Secrets of the Ancient Sea” we talk about the more distant past of our maritime country – both about how the area of Estonia was located 600 million years ago on the Southern hemisphere and about who lived in our waters when Estonia was covered by a tropical sea,” Olo describes the exhibition. There are four video installations in the exhibition hall of “Secrets of the Ancient Sea”, guiding the visitors on the journey through six eras up to today. “In the videos, the ancient marine creatures come to life and one can look into the eyes of a giant sea scorpion as well as admire graceful sea lilies,” Sander Olo says. “We see the possible appearance and likely behaviour of the ancient animals,” he adds. “The most extravagant video clip is probably the part describing the Devon era, in which a reconstruction of probably the first in-body fertilisation in world history has been created,” the curator introduces the content of the clips. In addition to video installations, the exhibition showcases models of the ancient marine creatures several metres long, showing how big the one time sea animals may have grown. There are 3-metre nautiloids and a 2,5-metre sea scorpion in the exhibition hall. There is also a selection of fossils from the museum collection, including brachiopods, corals, snails, vascular plants, and moss animals. In parallel with the exhibition “Secrets of the Ancient Sea”, the display “Our Sea” is open in the Estonian Museum of Natural History starting on January 20. The exhibition “Our Sea” introduces the species living the Baltic Sea, the connections between them, and the role of the human in the well-being of the Baltic Sea. It also provokes one to think about how closely we are all related. The curators of the exhibition “Secrets of the Ancient Sea” are Sander Olo and Kairi Põldsaar, the authors of video installations are Jaagup Metsalu and Erik Heinsalu (BOP Animation), and the exhibition is designed by Jüri Lõun (Creative Agency Pult). The exhibition “Our Sea” has been compiled by the University of Tartu Natural History Museum and curated by Veljo Runnel. The exhibition has been complemented by marine biologist Lennart Lennuk, the manager of the department of zoology of the Estonian Museum of Natural History. Both exhibitions are open in the Estonian Museum of Natural History until March 2018.
The production of the exhibition was supported by the foundation Environmental Investment Centre.
For more information click here

Share "Tallinn: Exhibition “Secrets of the Ancient Sea”" via: