Homepage>Events>Sting in concert in Tallinn

Sting in concert in Tallinn 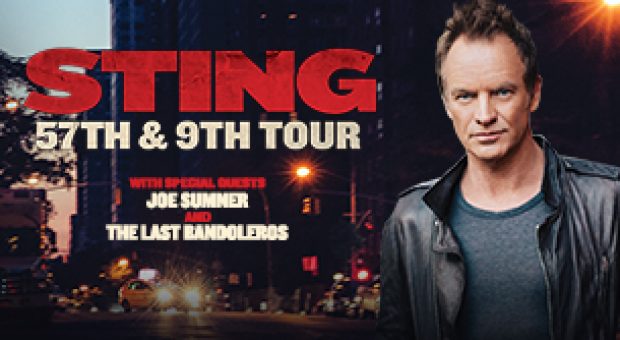 57th & 9th is the twelfth solo studio album by British singer-songwriter Sting, his first rock album in 13 years, released on 11 November 2016. Sting embarked on the 57th & 9th worldwide Tour. The tour began on February 1, 2017, at the Commodore Ballroom in Vancouver and will end in October 2017.
Do not miss Sting’s concert if you are in Tallinn at the end of September.

Gordon Matthew Thomas Sumner, CBE (born 2 October 1951), better known by his stage name Sting, is an English musician, singer, songwriter and actor. He was the principal songwriter, lead singer, and bassist for the new wave rock band the Police from 1977 to 1986, and also launched a solo career in 1985. He has included elements of rock, jazz, reggae, classical, new-age and worldbeat in his music. As a solo musician and a member of the Police, he has received 16 Grammy Awards (his first in the category of best rock instrumental in 1980, for “Reggatta de Blanc”), three Brit Awards, including Best British Male in 1994 and Outstanding Contribution in 2002, a Golden Globe, an Emmy and four nominations for the Academy Award for Best Original Song. He was inducted into the Songwriters Hall of Fame in 2002 and the Rock and Roll Hall of Fame as a member of the Police in 2003. In 2000, he received a star on the Hollywood Walk of Fame for recording. In 2003, Sting received a CBE from Elizabeth II at Buckingham Palace for services to music, and was made a Kennedy Center Honoree at the White House in 2014. He was awarded the Polar Music Prize in 2017. With the Police, Sting became one of the world’s best-selling music artists. Solo and with the Police combined, he has sold over 100 million records. In 2006, Paste ranked him 62nd of the 100 best living songwriters. He was 63rd of VH1’s 100 greatest artists of rock, and 80th of Q magazine’s 100 greatest musical stars of the 20th century. He has collaborated with other musicians, including “Rise & Fall” with Craig David, “All for Love”, with Bryan Adams and Rod Stewart, “You Will Be My Ain True Love” with Alison Krauss, and introduced the North African music genre raï to Western audiences by his international hit “Desert Rose” with Cheb Mami.