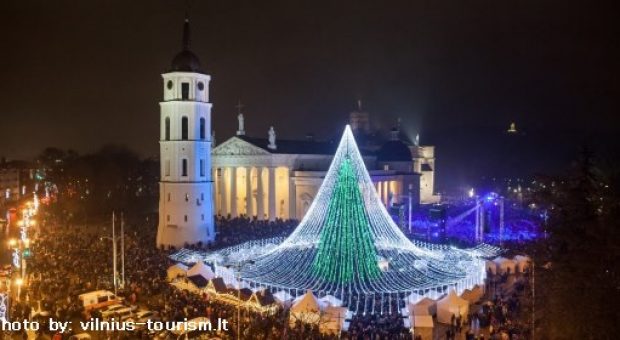 This winter holiday season will be memorable to the residents and quests of the lithuanian capital. Vilnius has prepared a great number of festal events and surprises for all the participants. As usual, the Christmas Tree will be the first to open the event and bring the festive spirit into the air of Vilnius.

Former House of the Board of Rabbis
The Supreme Board of Rabbis of the Vilnius Great Synagogue, which was recognised as one of the supreme authorities of the community, used to operate in this building. In 1903, representatives of the Jewish Community met with the patriarch of the Jewish national movement (Zionism) Theodor Herzl in one of its halls. This occasion is marked by a memorial plaque.

Vilnius University
The Centre of Non-state Languages (the former Centre for Judaism Studies) of Vilnius University is active in the sphere of preservation and dissemination of Jewish heritage. There is also the Yiddish Institute, in which the Yiddish language is taught and Yiddish literature is fostered. The Department of Yiddish Language and Literature was established at the end of 1940, but only survived until the beginning of the war in Lithuania. The Head of the Department, Docent Noach Prilutski managed to publish a book on the history of the Jewish theatre and he prepared and conducted several courses on the Yiddish language and culture. Over the years of the war, many university professors and employees helped in the efforts to save Jews. One of the most prominent saviours was Ona Šimaitė, librarian and publicist, for whom a memorial plaque has been installed in the library courtyard. Between 1866 and 1915, the famous art school of I.P. Trutnev was located in the premises of the University. Many artists and sculptors who later earned world recognition studied in this school, including Jacques Lipchitz, Naum Aronson, Chaim Soutine.