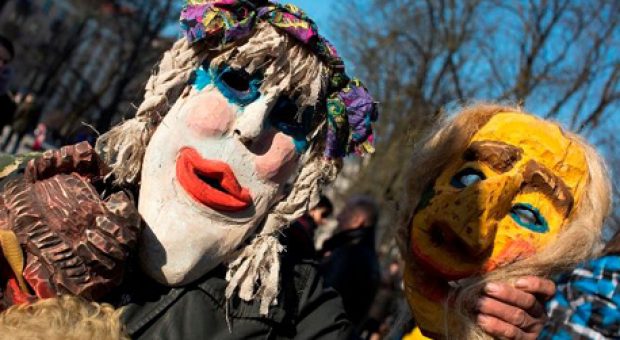 Furious, merry Carnival in Vilnius invites the city dwellers and city guests on 25 February to Gedimino Avenue to rage, make it loud and drive cold winter away by any other means. Carnival is a holiday of the community. At all times, this holiday was a perfect occasion not only to romp and joke merrily, but also to friendly mock at members of the community, to give publicity to everyday actual matters with humour, and nobody got angry at this. Presently, some TV shows do it every day. So, we are waiting for devils, bears, goats, doctors, beggars, strangers and all other disguised people to romp merrily. Participants shall be entertained by abundant, greasy, warm fair with pancakes and other specialties, furious traditional merriments for children and adults, concerts, dances and jokes.

Tolerance Centre
At the end of the 19th century this building was occupied by a canteen for the poor, organised by the Community for Cheap Jewish Canteens, which also worked during World War I. From 1918, a professionalJewish theatre was established here and after 1930 the building was occupied by the Mūza (Muse) cinema. The building was transferred to the State Gaon Jewish Museum in 1989; in 2001, the Tolerance Centre¬—which hosts various exhibitions and cultural as well as political events—was established here.

First Seat of the YIVO
In 1925, Max Weinreich established the seat of YIVO (Jewish Scientific Institute) in one of the apartments of this building. This institute soon turned into the largest Jewish scientific institution in the world. The leading figures of science and public affairs of the world—A. Einstein, Z. Freud, E. Bernstein and others—were members of the Honorary Presidium of the Institute. YIVO performed a mammoth task in cherishing Yiddish philology and taking care of Jewish heritage in Eastern Europe. YIVO was eliminated in Vilnius during the World War II.