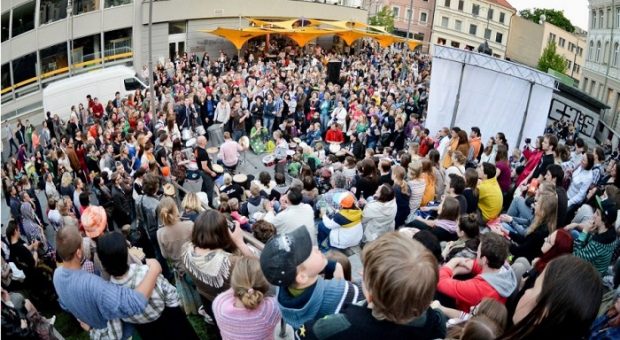 Street Music Day is the event which unites all who speak the world’s most universal language – the language of music. In response to the invitation from musician and actor Andrius Mamontovas, professional and amateur musicians flood into the streets, yards, parks and squares of Vilnius. Armed with a variety of musical instruments, they play rock, classics, jazz, avant-garde and folklore and beat African rhythms. On this day all Lithuanian cities and towns engage into the fest of free creation and socialising between musicians and the public.

Monument to the Vilna Gaon
The name of Vilna Gaon Eliyahu ben Shlomo Zalman (1720–1797)—one of the most prominent Jewish sages and a world-famous Torah and Talmud analyst—put Vilnius on the map as the Jerusalem of Lithuania. His former house is marked with a memorial plaque and amonument in his honour (created by Kazimieras Valaitis) can be found near the house.

Big Ghetto (1941–1943)
The Big Ghetto of Vilnius existed from 6 September 1941 to 23 September 1943 (Lydos, Rūdninkų, Mėsinių, Ašmenos, Žemaitijos, Dysnos, Šiaulių, Ligoninės Streets). There were around 29,000 Jews in the Big Ghetto; most of them were killed in Paneriai. 18 Rūdnininkų St. marks the place of the main entrance into the Big Ghetto; this is indicated in a memorial plaque bearing the plan of the ghetto. The quarter between Ašmenos, Dysnos and Mėsinių Streets is the first quarter of historical Vilnius to be under reconstruction.At present, the Jewish Culture and Information Centre is operating here. Between 1921 and 1951, the present Žemaitijos Street was named after M. Strashun. The books collected by Matityahu Strashun laid the basis for the largest Judaism library in Europe, which was established in Vilnius in 1892. The library itself was destroyed together with the Great Synagogue. Following the restoration of Lithuania’s independence, the day of elimination of the Big Ghetto of Vilnius (23 September) was declared the Day of the Jewish Genocide in Lithuania.