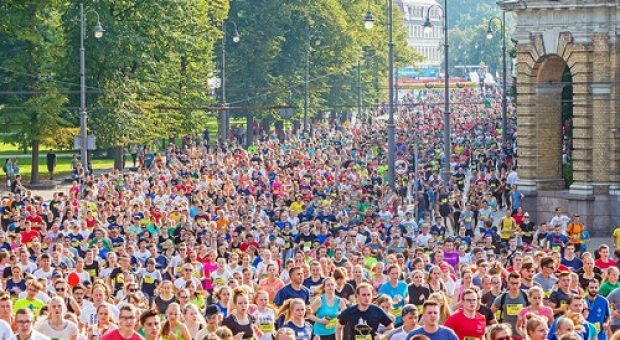 The Vilnius Marathon was first run in 2001. It became a classic marathon in 2004 and a half marathon was introduced in 2006. Described by some as one of the most greenest marathons, the Vilnius Marathon follows a route through the modern city and scenic old town. The race starts and finishes at Cathedral Square in the centre of town. Out and back it follows along both sides of the river Neris. While running, participants will be able to appreciate many of the historical and architectural monuments of Vilnius, such as the Gediminas castle, the Cathedral, the campanile and the Hill of three crosses.

Small Ghetto (1941)
With Jews gradually settling in Vilnius, their living quarters were taking shape. During the years of Nazi occupation, the Small Ghetto was created in the quarters (Stiklių, Gaono, M. Antokolskio, Žydų Streets) and around 11,000 Jews were herded into it. The Small Ghetto was eliminated on 21 October 1941 and all the Jews who lived there were killed. The crossing point of Stiklių, Gaono, M. Antokolskio and Žydų streets is the core of the Jewish quarter and was home to the glass market that used to be there in the 17th and 18th centuries as well as the numerous gabbling Jewish merchants and the abundance of various goods on sale. A famous sculptor of Jewish descent M. Antokolski was born and lived in the house at 25 Didžioji St.

Former Great Synagogue
The Great Vilnius Synagogue—the main spiritual and cultural centre of the Lithuanian Jews—existed from the end of the 16th century until the Holocaust. As of 1573, the Jewish community in Vilnius had a right to have its own house of worship; however, the first temple was made of wood and was subject to various limitations. In 1633, King Vladislovas Vaza (Władysław Vasa) granted the privilege for construction of a stone synagogue in the Jewish quarters; however the limitations were not lifted. In its size and splendour, the synagogue surpassed all other synagogues built at that time; it could accommodate several thousand people. Later, the synagogue was damaged during the wars and fires. During World War II it was severely damaged. The Soviet authorities destroyed the Great Vilnius Synagogue, an architectural monument of global significance.