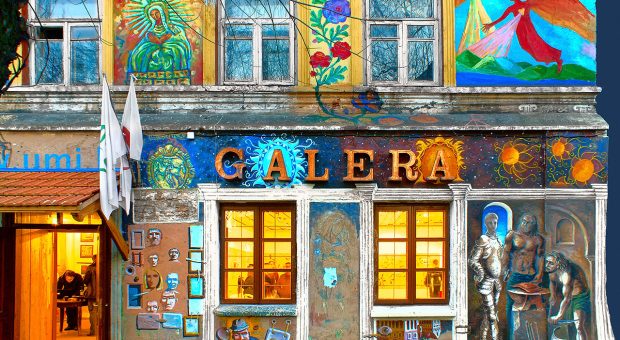 Vilnius also has a Montmartre of its own – the Uzupis Republic, the Mecca of artists with different galleries and art performances. Upon arrival in the central square of Uzupis, you are greeted by the bronze statue of the Angel of Uzupis. In the Paupio Street, one can read the constitution of the Uzupis Republic in various languages, affixed to a fence and a wall. In addition to its own constitution, Uzupis has its own anthem, a sheriff, a bishop, two churches, and seven bridges. In Žvirgždyno Street, you can find one of the oldest cemeteries in Vilnius, the Bernardine cemetery, with its moss-grown gravestones. During the Soviet period, Uzupis fell into neglect, but due to the presence in the neighbourhood of the Vilnius Academy of Arts, artists began to take up residence. Alternative fashion festivals, concerts, performances, creative parties, and poetry-readings all take
place in Uzupis. Alternative art shows are held at the “Galera”, the Uzupis arts incubator.
The 1st of April Uzupis Republic celebrates its independence day.

Užupis is a unique state within a state—a colourful and living island detached from the city by the river Vilnelė. It is more than just a place for artists and a mysterious and romantic area; it has its own president, anthem, constitution and guardian—the bronze Užupis Angel (sculptor Romas Vilčiauskas). The constitution of the Republic of Užupis is available for public viewing on the fence at the beginning of Paupio Street. The wall in Paupio Street features an open palm, which symbolises the openness of this special area to everyone, and at all times. While taking a walk along the riverside of the Vilnia, one might chance upon artists at their work. Užupis also has its own holidays—Užupis Independence Day, the Fish Day, etc. The Bronze Mermaid, also called the Maiden of Užupis, (sculptor R. Vilčiauskas) is another symbol of Užupis. The mermaid is sitting in a niche in the embankment of the Vilnia. They say that she allures people from all over the world to come to Užupis; and those who fail to resist her c arms will stay in Užupis forever. The Užupis Art Incubator (Užupio St. 2/11) is an extraordinary cultural organisation which is also open to the public. It is noted for its gallery and exhibitions of diverse styles, as well as the novel painting of its walls which are intertwined with the riverside sculptures. The Užupis Art Incubator is the place where artistic, communal and cultural ideas of young people are born and developed.