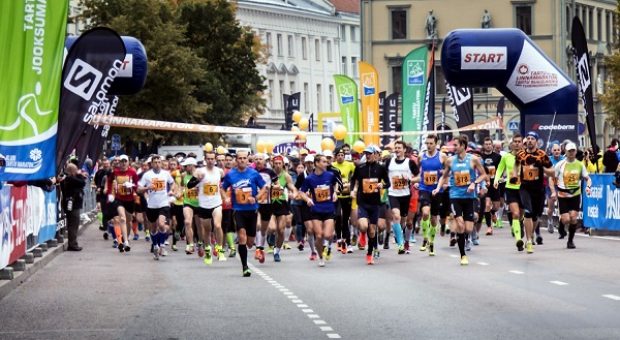 Tartu Running Marathon (or Tartu Jooksumaraton), the biggest cross-country running event in the Baltics, got itself a new name and is now called Tartu Forest Marathon (Tartu Maastikumaraton). Also, 5 and 42 km distances have been added to the programme in recent years. Every year about 4000 runners participate in the event.

Nordic walkers are also welcome to attend the 24, 10 and 5 km distances.

If you have some free time, we suggest you to visit the south of Estonia and discover the Seto land and the Peipus lake. In the south easternmost corner of Estonia, a small fragment of people known as the Setos have clung to their own customs, traditional costumes and language to this day. The Setos are also known for their singing traditions. Their songs, following a thousand year old tradition, are called leelos. The Seto Farm Museum, with its recreated 19thcentury farmhouse complex, and the Obinitsa museum provide an opportunity to discover the traditional Seto way of life, handicrafts and everyday items used by this Slavic-influenced people. In Seto Tsäimaja is a restaurant where Seto cuisine is served. The town of Värska is known for its picturesque stone church, its curative mud and its mineral rich water which is sold all over Estonia. Visitors can also bathe in the mineral water at the spa a couple kilometres down the road. Estonia is the most meteorite-cratered place on earth. One of the six known areas of meteorite craters in the county can be seen near Ilumetsa. Estimated to have landed about 6,600 years ago, the asteroid created a total of five craters here. The largest and best-known is the 80-metre wide, 12-metre deep Põrguhaud (Hell’s grave). A couple of hundred metres away are two other craters. According to legend, these “graves” are a direct route to hell. Southern Estonia is known for its orangey/red Devonian sandstone outcrops, such as in the picturesque Ahja river valley. At Taevaskoda on the river Ahja the sandstone cliffs rise to a height of 24 metres above the river. Just a couple of kilometres before the shore of Lake Peipus in Tartu County is the fairy-tale Alatskivi castle. Built between 1880 and 1885 is it the most beautiful neo-Gothic style building in the Baltics with its snow-white towers. The mansion was modelled after Balmoral in Scotland. The route alongside the Shore of Peipsi Lake follows the old Russian tradition of having only one street, which means villages blend organically with each other. Here can be found some of the world’s few villages still populated by the ‘Old Believers’. These are the descendent of a highly religious, ethnic Russian minority who came across the lake in the 17th and 18th centuries to seek sanctuary from persecution after they resisted reforms in the Orthodox Church.