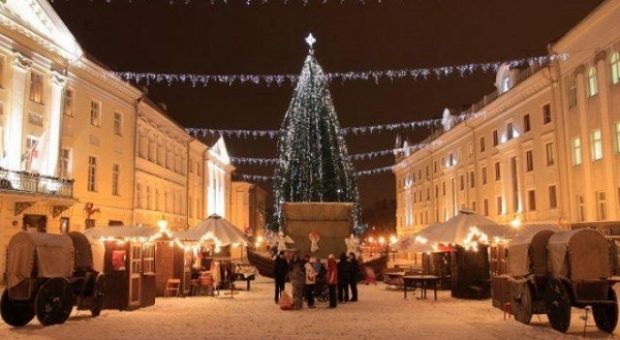 The traditional Christmas Fair takes place at the Tartu Town Hall Square and near it. Visitors can buy handicrafts made in Estonia, warm drinks, pies, and other products.

The youthful university city of Tartu in southern Estonia is also the birthplace of the national song festival tradition, which started in 1869. An important symbol of the town is a fountain with a statue of students kissing under an umbrella, located in Tartu’s Town Hall Square. On one side of the historical late 18th century square stands a building that has been called Estonia’s leaning tower of Pisa, built partly on the city wall, partly on wooden piles that collapsed, now the site of an art museum. The city’s most important structures are close by, the main building of the University of Tartu, founded in 1632, and the recently restored St. John’s Church, which contains over 1,000 well-preserved terracotta sculptures. A key geographical feature of the city is Toomemägi, the site of an ancient citadel. It is now an English- style park and a popular place for students who congregate near its Angel’s and Devil’s Bridge. Pedestrian paths follow the crest of the hill to the red brick ruins of the Dome Church, once the largest cathedral and brick structure in Eastern Europe, now housing Tartu’s Museum of History in the renovated part of the church.