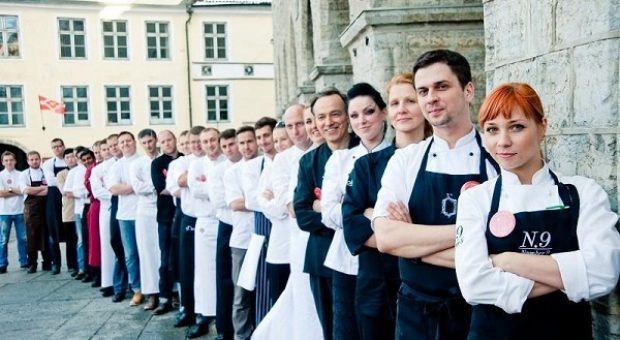 Tallinn Restaurant Week declares the first week of November as the week to celebrate good food and good restaurants. For one week Tallinn becomes a foodie heaven.

Take the opportunity to discover the beautiful Estonian capital. The two world wars were both key turning points in Tallinn’s history. In 1918, Estonia found itself in a power vacuum, part of a post-revolutionary Russian empire that was in tatters, but still fighting against Germany. On February 24, a group called the Estonian Rescue Committee proclaimed the Republic of Estonia independent and declared neutrality in the ongoing war. Germany immediately invaded, but at the start of the November Revolution in Germany, its occupation troops left Estonia and power passed to the Estonian Provisional Government. At once, the new national government had to set up defences against the Russian Bolshevik army and the Estonian War for Independence began. The 13-month war ended with the signing of the Tartu Peace Treaty, in which Russia gave up its claims to Estonian territory. Tallinn was now the capital of the independent Republic of Estonia. In autumn 1939, the Molotov-Ribbentrop Pact was signed between the Soviet Union and Germany, which secretly carved up Europe, putting the Baltics in the Soviets’ sphere of influence. In June 1940, the Soviet army occupied Estonia and the country’s independent statehood was abolished. But the tides of World War II shifted, and on August 28, 1941, German troops moved into Tallinn, beginning a three-year occupation. On the night of March 9, 1944, Tallinn was bombed by the Soviet air force – about five hundred and fifty civilians were killed and 5,073 buildings were destroyed or damaged. A large part of Tallinn’s valuable Old Town escaped major damage and only Harju Street and Niguliste Church suffered heavily. On September 23, 1944, Soviet troops re-invaded Estonia, forcibly incorporating it into the USSR. As the capital of a Soviet republic, Tallinn saw large-scale industry move in during the 50s, 60s and 70s, along with colossal housing projects to accommodate the influx of Russian workers. But in the 1980s, cracks in the system became evident. At the end of that decade, mass protests began, and on August 20, 1991, after a failed Kremlin coup, Estonia became independent once again. Since that time, Tallinn has made huge strides, developing into an important political and business centre as well as one of Northern Europe’s most popular tourist destinations. Estonia was acepted as a member of both NATO and the European Union in 2004.