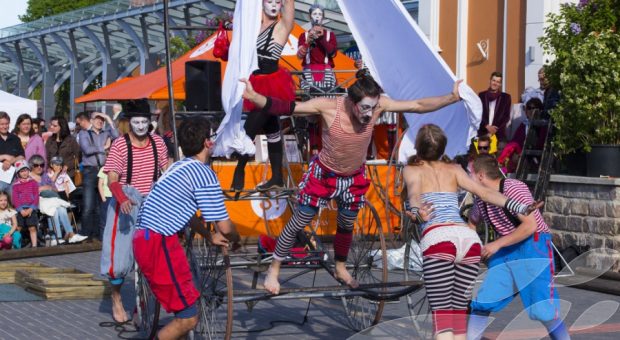 During Sigulda Town Festival many fun and active events will be held – traditional festive procession, amateur performances, concerts and attractions for children. Holiday culmination will be a special concert and open-air party. A special restaurant for children will be set-up during the Sigulda Town Festival, which will pay special attention to meals for the little ones. Chefs from the Riga-Gauja region will be on hand to serve dishes for the whole family.In addition to the food tastings, an extensive cultural program for families will take place, featuring entertaining musical performances, as well as many other activities.

If you are in Sigulda, plan some time to visit the city and the Castle of Turaida.

Sigulda and Turaida are also known for the Legend of the Rose of Turaida that you can read hereafter:

“In the spring of 1601, during the Polish – Swedish War, Swedish troops occupied the Turaida Castle. After the battle, the clerk of the castle, Greifs, found a few week-old girl between the killed soldiers. He carried the girl home and pledged to raise her. It was May, so the girl was named Maija. Years passed, and Maija grew into a pretty maiden. Because of her beauty people called her the Rose of Turaida. On the opposite bank of Gauja – in the Sigulda Castle – lived her fiancé, gardener Viktors Heils. In the evenings they met at Gutman’s cave. At that time two Polish army deserters – Jakubovskis and Skudrītis – served at the castle. Jakubovskis lusted after Maija and wanted to marry her, but she rejected his proposal. It enraged Jakubovskis and he decided to get the girl by force. He sent Skudrītis as if on behalf of Viktors to tell Maija to come to their usual meeting place, but – at an unusual time. When Maija came and saw that it was a trap, she decided that she would rather die than be embarrassed. It was a time when people believed in witchcraft. There was a red silk handkerchief around the girl’s neck, which her groom had given her, so she said to Jakubovskis that this scarf has a magical ability – it shields its carrier from a sword, and asked him to try it out. Jakubovskis hesitated at the beginning, but then he took the sword and hit her as strong as he could, and the girl collapsed at his feet. Jakubovskis, frightened and revolted by his own deed ran into the forest and hanged himself. In the evening, Heils found the killed Maija at the cave, and rushed to Turaida for help. Viktors’ hatchet was found with blood at the cave. A court was held in Turaida Castle and it was ruled that the killer was Viktors, and sentenced him to death. Skudrītis, who had followed Jakubovskis and seen everything, changed the course of events. He told the court what had happened in reality, and Viktors was set free, but the girl was buried in the cemetery at the church of Turaida. Her memorial can be seen at the Turaida church.” The old legend inspired several authors to create works of art on the Rose of Turaida about eternal fidelity and the power of love.