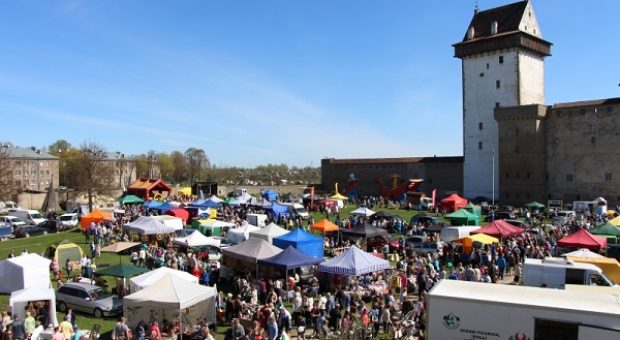 The Spring Fair on the Narva River Promenade is a traditional fair where the citizens and visitors of Narva can buy artisan products, plants from tree nurseries and a sundry of other goods from hundreds of merchants. On the stage, there are various shows and an entertainment program. Entrance to the fair is free.

Take the opportunity to discover the Narva’s region. Some 100 km from Narva is Pühtitsa Convent, Estonia’s only Orthodox convent, open to both tourists and pilgrims. A small Orthodox Christian church was built in Pühtitsa in the 16th century and the convent was founded in 1891. It now houses six churches. The site is claimed to be where a shepherdess witnessed a divine revelation near a spring of water. This water is claimed to have healing powers, it can be bottled and taken away. Back to the north, to the town of Sillamäe, which during the Soviet regime in Estonia was closed to the public because of its chemical factory which produced nuclear materials for Soviet nuclear power plants and weapon facilities. Now Sillamäe offers a classic example of Stalinist city planning, its grand boulevard leading from the central square to the sea offers an atmospheric trip back to the 1950s. Continuing east, the next coastal town of Narva- Jõesuu is located alongside Estonia’s longest bathing beach, backed by dunes and ines. This former spa town, frequented at one time by Russian nobility is now increasingly popular with summer tourists. Narva-Jõesuu is the north-eastern end of the E9 European Coastal Path, which runs for 5,000 km (3,125 miles) from Cabo de São Vicente in Portugal.