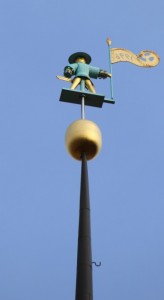 One of the most important legend is the story about Old Thomas( Eesti Vana Toomas). Since the year 1530, there is a wind vane on the top of the City Hall tower which is located Tallinn Old Town feature with the shape of a old man with a hat, who holds a spear in his hand made.

The legends tells that in medieval Tallinn, every year an archery contest was held to see who could shoot a wooden parrot off the top of a high pole although this was a game held only for the rich and aristocratic people. The legends says that no one could shoot down the parrot, until a young boy called Old Thomas gave it a shot. He hit the target with remarkable precision.

For that, he got in trouble because he was from a very poor family but instead of getting tied up to the Post of Shame, he was made an apprentice guard, because he had such remarkable skills. Thomas eventually became an expert soldier and a great guard loved by many.

When he died, the city made a metal statue and put it on top of the City Hall, so Thomas could still look after Tallinn until the end of times. The citizens of Tallinn still believe that as long as Old Thomas is up there, looking after them, nothing too bad can happen to the city.

If you are interest to visit Old Thomas in Tallinn Old Town, We can offer a great tour start price from 15 EUR per person. It’s called “Legends of Tallinn” and is now available for you to book at https://www.smarttravel.ee/holiday/legends-of-tallinn