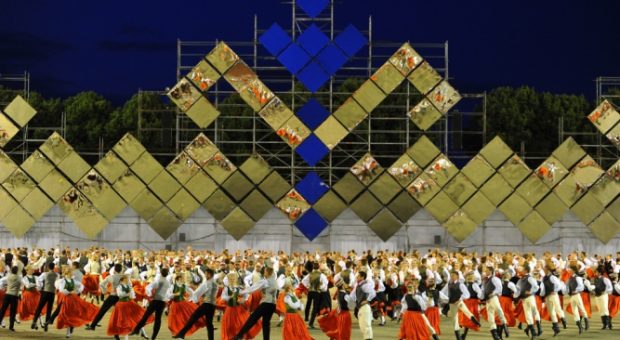 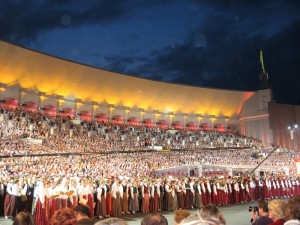 Riga, the wonderful capital of Latvia, will host one of the greatest festival of all the Baltic countries: the Latvian Song and Dance Festival (30th June-8th July 2018)

The Latvian Song and Dance festival is actually held every five years and it will be held on 25th time this summer. This could be an great opportunity to visit Riga and take a full immersion into the wonderful and little-known Latvian culture.

This summer, an entire week will be dedicated to latvian folk singers and dancers: Riga will be filled with music, offering one of the most beautiful experiences ever.UNESCO clearly had the same impression, as it included the Song and Dance Festival in the list of Masterpieces of the Oral and Intangible Heritage of Humanity.

The gala concert represents the most important part of the Song and Dance Festival, and it is so for a good reason: is anywhere else possible to listen to more than 10 thousand singers? Latvian listeners love their folkloric musical traditions, and are well-known for being an extremely active audience: very likely, they will be joining the singers in their most beloved songs, giving an unforgettable atmosphere.

Latvian people are really tied to their musical tradition as it was a way to preserve their national identity when Latvia was not yet an indipendent state; as it is often said, it was also a chance to rebel against Soviet authorities during the russian domination.

The first Song and Dance Festival took place in 1873, with 1003 singers and 30 orchestras participating; in 2007, over 30.000 performers participated in the event.  The festival tradition kept going on even in Displaced Person camps during the post World War II era, mostly in West Germany, but also in the United States, Australia and Canada; even now, an abroad Song and Dance Festival takes place every four year in the United Stated and in Canada.