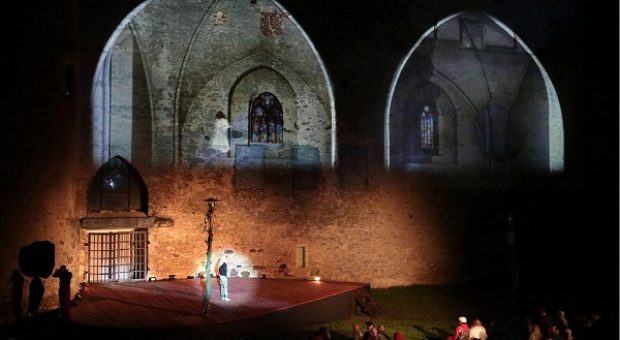 On the Baptistery’s circular window built into the southern wall of Haapsalu Dome Church a female figure appears during the full moon nights in August, who has been named the White Lady. How and why this woman reveals herself on the chapel’s window for centuries a legend tells the following: In the Middle Ages, during the reign of Oesel-Wiek Bishop, every canon was supposed to lead a chaste and virtuous life according to the rules of the monastery. Access of women to the Episcopal Castle was forbidden by threat of death. However it happened so that one canon and an Estonian girl fell madly in love with each other. As the young people could not stay apart, the canon dressed the girl up as a boy and brought her to the castle to sing in the choir. For long it remained the secret, but one day the deception was discovered. The verdict of the Bishop was harsh: the canon was thrown to the castle’s dungeon to starve to death, while the girl was immured alive in the wall of the Baptistery, then under the construction. Lamenting of the poor woman was heard for several days until she finally silenced. Yet her soul could not find the peace and, as a result, she appears on the Baptistery’s window to grieve for her beloved man already for centuries, and also to prove the immortality of love. The White Lady Festival has been one of the highlights of the summer in Haapsalu for three decades. In the weekend closest to the August full moon the Haapsalu old town transforms into a buzzing marketplace, where the vibrant culture programme lasts from dusk till dawnand upon the arrival of the darkness open-air performances of the White Lady take place.