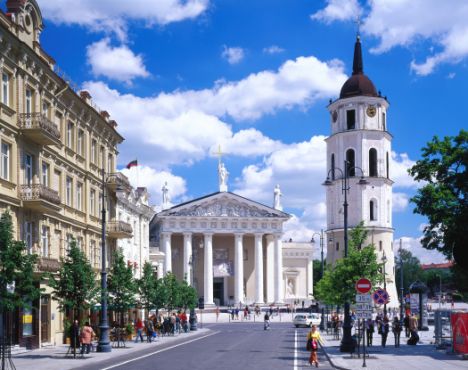 Vilnius Old Town is one of the largest (approximately 3.6 km2 ) and most beautiful old towns in Central and Eastern Europe.The name of the city originated from the Vilnia River.The name of the river derives from the Lithuanian language word vilnis (“a surge”) or vilnyti (“to surge”).

Vilnius, the name of the capital of Lithuania, was first mentioned in 1323 in a letter of Gediminas, the Grand Duke of Lithuania. In the letter, Gediminas invited European merchants and craftsmen to come and settle in Vilnius and promised them every support. Since then, Vilnius has been famous for its tolerance towards different nations and religions. Names of streets in the old town (German, Jewish, Tartar, and Russian streets) and shrines of nine religions testify to the multinational composition of the population.

The most valuable historic and cultural sites are concentrated here. The buildings in the Vilnius Old Town – there are nearly 1,500 – were built over several centuries, creating a blend of many different architectural styles. Although Vilnius is known as a “Baroque City”The Vilnius Old Town was inscribed on the UNESCO World Heritage List in 1994.

Today ,Vilnius is a cosmopolitan city and its has been rapidly transformed. The town has emerged as a modern European city. Many of its older buildings have been renovated, and a business and commercial area is being developed into the New City Centre.

If you wish to visit Vilnius and enjoy a sightseeing tour of the Vilnius Old Town with Vilnius Cathedral, Gediminas Tower, St. Anna’s Church, Peter and Paul Church, Old University and the Gates of Dawn.