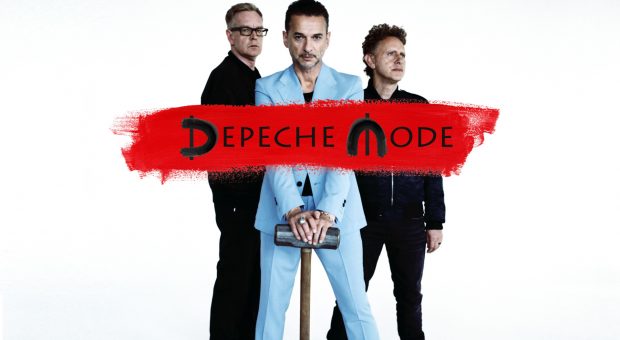 The Global Spirit Tour is an ongoing worldwide concert tour by British electronic music band Depeche Mode in support of the group’s 14th studio album, Spirit. The worldwide tour started in May 2017 and will end in March 2018. During the summer 2017 the tour will see the band play to more than 1.5 million european fans in 32 cities and in in 21 countries across Europe.

Depeche Mode is an English band known for a dark sound that combines synth pop with industrial rock and for lyrics that explore sexual and political themes. The group formed in Basildon, Essex in 1980 and consists of founders Dave Gahan (lead vocals), Martin Gore (guitar, keyboards, vocals), and Andy Fletcher (keyboards, bass). Depeche Mode released their debut album Speak & Spell in 1981, bringing the band onto the British new wave scene. Original band member Vince Clarke (keyboards, guitar), left the band after the release of the album. Gore took over the lead songwriting duties and, later in 1982, Alan Wilder (drums, percussion, keyboards) officially joined the band to fill Clarke’s spot, establishing a lineup that would continue for the next 13 years. The band’s last albums of the 1980s, Black Celebration and Music for the Masses, established them as a dominant force within the electronic music scene. A highlight of this era was the band’s June 1988 concert at the Pasadena Rose Bowl, where hey drew a crowd in excess of 60,000 people. In the new decade, Depeche Mode released Violator, an international mainstream success. Depeche Mode have had 50 songs in the UK Singles Chart and seventeen top 10 albums in the UK chart; they have sold over 100 million records worldwide.Q included the band in the list of the “50 Bands That Changed the World!”.Depeche Mode also rank number 98 on VH1’s “100 Greatest Artists of All Time”.In December 2016, Billboard magazine named Depeche Mode the 10th most successful dance club artist of all time. In October 2017, it was announced Depeche Mode is one of the nominees for the Rock and Roll Hall of Fame in 2018.