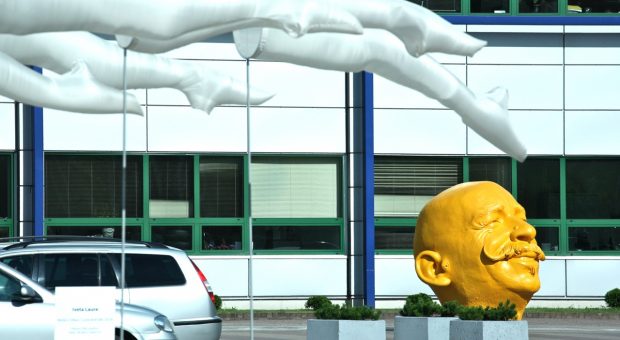 ArtVilnius is an international contemporary art fair that has been taking place in the Lithuan capital every year since 2009. ArtVilnius will take place from June 8th till the 11th 2017 and it will offer all his visitors, collectors and professionals a broad art review which appears to be even more abundant than the last year.This year the fair will host 52 galleries from 15 different countries. uring the fair, art lovers will be offered an intensive program and special art projects.
Among the most important additional events there is the selection of the best young artist, the best artist and the best gallery, judged both by professionals and visitors. The art fair also offers parallel events such as conferences, discussions, workshops.
Please click here for additional info.

Lithuanian Jewish Community
The construction of this building at the turn of the 19th century was funded by architect T. Rostvorovskis.It used to be occupied by the Tarbut Gymnasium (the former J. Einstein Gymnasium). The Lithuanian Jewish Community, which re-established itself in 1989, unites all Jewish organisations in the country. There are around 5,000 Jews living in Lithuania. The community organises cultural, educational and religious events; it takes care of the Jewish cultural and historical heritage, and devotes much time to fighting anti-Semitism and promoting the Yiddish language. Community life is full of various events, exhibitions, concerts and Jewish celebrations.

Vilna Gaon Jewish State Museum
The museum acquired its name in 1997, in commemoration of the 200th anniversary of the death of the Vilna Gaon. Near the museum there is a monument to a Righteous Man, the Dutch Ambassador to Lithuania Jan Zvartendijk, who in 1940 granted around 2,200 visasto Jews on the island of Curaçao and thus savedtheir lives. Next to it there is another monument to a Righteous Man, Sempo Sugihara, Japanese Consul in Lithuania between 1939 and 1940, who issued over 6000 transit visas to Jews in 1940.